Telling the Story of Hearing Loss: An Interview with Jim Spotts 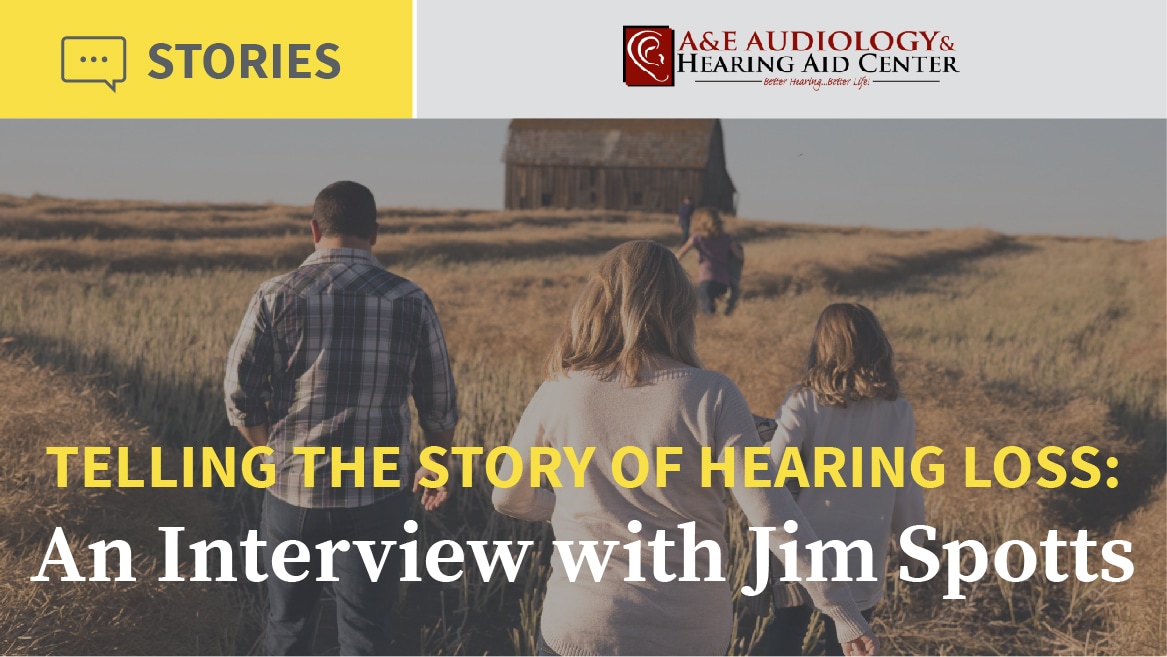 Even if patients don’t show or notice hearing loss, we know that certain diseases are directly related to hearing loss. We want those patients in our offices so their quality of life and brain health does not diminish.

Jim Spotts recently convinced his mom to make an appointment with A&E Audiology & Hearing Aid Center. She finally gave in after he requested it for Christmas.

“I told her all I wanted was for her to get her hearing checked,” he said.

Jim is our Practice Relationship Manager at our Lancaster hearing office. Back in September 2016, Jim joined our team as a liaison between family doctors, general practitioners, and specialists and our practice. We wanted to educate doctors on the connections between hearing loss, diseases and cognitive decline.

“We’re trying to get patients in here that maybe aren’t necessarily complaining of hearing loss, but they have a disease that is often associated with it,” Jim explains.

Jim’s mom was fitted with a set of hearing aids on a Monday. She was apprehensive about coming in, but was pleasantly surprised by how discrete the devices were and the ability to try them for a week. She wasn’t sure she could afford them either, but for the sake of her son, she agreed to give them a shot.

The next day, she called Jim to tell him she couldn’t live without her new devices.

“She told me she couldn’t believe she hadn’t tried them sooner. She couldn’t afford not to have them,” Jim says.

Most doctors don’t know that there is a relationship between hearing loss, disease, and cognitive decline. That’s where Jim comes in. He goes out to family doctors, general practitioners, and specialists in Lancaster County to educate them on the importance of hearing healthcare.

​“I want to educate doctors and let them know there’s a story to be told around hearing loss,” Jim says. Tweet This

And it’s true: there is an important connection between diseases like cardiovascular disease, diabetes, and high blood pressure, among others, and hearing loss. Doctors often don’t know that with disease and hearing loss will come cognitive decline if hearing loss is left untreated.

Not only does Jim aim to educate doctors so they can know when to refer patients to A&E, he also wants them to understand the value of hearing aids.

Jim’s mom didn’t realize she was missing sounds from the world around her until she was fitted with her hearing devices. She wasn’t even planning to buy them when she first got them. But after hearing the world fully again, she realized she didn’t want to live a day without them.

“Doctors say their patients can’t afford the hearing aids, but we need to let the patients make that decision,” he tells us. “What if my mom’s doctor just didn’t think she could afford the devices and didn’t offer a referral? If someone made that decision for her, she would go her whole life without great hearing.”

​There isn’t a price to put on better hearing, better brain health, and a better life. Tweet This

The story of hearing loss needs to be told, and we want to be sure doctors all over Lancaster Country know it. It’s not about telling our story, it’s about telling yours. ​

"A&E in Lititz, PA is extremely inviting. The folks there are on top of their game, with great knowledge and wonderfully easy to understand explanations about the hearing tests. They outfitted me with a great hearing aid that helps me tremendously and fit my budget. This is by far the best Audiology clinic I have ever been to. I highly recommend."- Andrew W.

"This place is amazing. The office is well put together, the ambiance is beautiful and the staff is amazing. Whenever you need to have your hearing tested, this is the only place in the area you should come to!"- David T.

"I have been a patient for over 10 years, and I have always had a wonderful experience with A&E Audiology. The audiologists ensure that you are satisfied and the staff is so considerate. I have been wearing hearing aids since I was four and this is by far the best practice I have been to, and I have no intention of going anywhere else!"- Bethany N.

We Service All The Following Towns & Their Surrounding Areas...